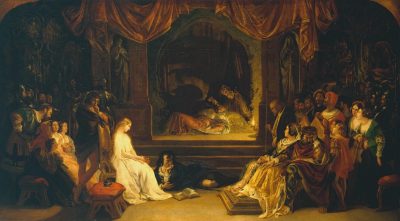 Author’s note:  This post originally appeared on the blog for the Digital Cultures Collaboratory at UWM.

Released over three decades ago, Origin Systems’ Ultima IV in an anachronistic computer game to be playing in an age of ultra-real aesthetics and NPCs fueled by rudimentary forms of artificial intelligence. True, it’s graphics are crude even by Cold War era standards. The interface resists logic. Interactions with entities within the game are clumsy and robotic.

These elements obscure a sophistication with regards to development that is significant in the history of computer game design and the medium’s position in the lineage of media writ large. At the time, this emergent art (yes, art) form was struggling to break free from traditions rooted in tabletop role playing games and literature. Ultima itself was born of creator Richard Garriott’s love of Dungeons & Dragons and live action role-playing (LARP). Both activities are among the primary influences of Garriott’s work and are evidenced in too many ways to list here. Generally speaking, there was no shortage of motivations for creating games. What developers and enthusiasts wanted was for games to be taken seriously.

Ultima IV‘s opening scene, discussed at length in Classic Quest’s first U4 episode, exemplifies the approach developers took to legitimizing games as an artistic achievement. Used in literature, film, and painting, the mise en abyme is a technique in which a work is placed within itself. By opening the game with a miniaturized theatrical acting-out of the game, Ultima IV is asserting a position beside the works of Marry Shelley’s Frankenstein, Orson Welles’ Citizen Cane, and Shakespeare’s Hamlet.

Within games themselves, this knack for self-referencing has become common. The latest installments in the Wolfenstein series, for example, each contain bonus levels where one can play levels reminiscent of the original Wolfenstein 3D. This takes a sardonic tone in Galactic Cafe’s The Stanley Parable (2013). This meta-game, which offers a scathing existential commentary on the game player, opens with a menu image depicting an infinite mise en abyme of computer screens. This intentional self-reflection negates immersive effects, says Piotr Kubiński, instead placing the player in a state of “emersion” (2017, p. 54). This design choice, according to Kubiński, demands that the player engage the game in a new way through an “experience [that] is transferred to the level of a critical play with the medium and its rules (p. 55).

This capacity for self-commentary is a signature for modern art, most (in)famously by Duchamp with his guerilla installation “Fountain.” Duchamp’s upturned urinal has been the source of interpretation and critique for a century due in large part to the work’s stance as meta-art. Duchamp did not likely care what the opinion of the viewer was only that the viewer be forced to confront the existence of such a thing. Although Duchamp’s repurposed urinal left an indelible mark on aesthetics, it did little to slow art’s commercial trajectory or slip into graphic design. Still, over a century later, “Fountain” (or its replicas at least) still demands that the viewer reconcile her own attitudes about aesthetics (“How do I know it’s art?”), the value of whatever might be called “art” (“How important is art?”) and the forces that affect our definition of the form (“This is art!”).

Ultima IV doesn’t quite get to this point. By staking a claim in the high arts, however, Garriott was prompting players to recognize that games were more than just the sum of their design elements, algorithms, and feedback loops. The sophisticated device of mise en abyme found in the most revered of the visual arts – now seen in a computer game – demonstrated the capacity for the form to reflect and intelligently consider itself as something of value and merit.

Kubiński, P. (2017). Play it again, stanley: Mise en abyme and playing with convention and narrative in the stanley parable. Tekstualia, 1(3)